Dexter Allen of New Orleans, convicted by a Jefferson Parish jury of brutally executing a father and son in their Metairie home while on an auto burglary spree in a residential neighborhood two years ago, was sentenced on Friday (April 21) to  life in prison without parole.

Allen, 19, snuck into the Pence family home just before midnight on April 22, 2015, killing David Pence, 56, and his son Nicholas Pence, 25, with blasts from a stolen shotgun. Allen, who lived with his mother in New Orleans at the time, traveled to Metairie in sports-utility vehicle that he allegedly carjacked earlier that day in Orleans Parish.

Allen targeted a car parked in the Pence driveway. From there, Allen entered the home, intending to steal a purse set on the kitchen counter, which he could see from outside. David Pence was shot as he slept in a recliner, and Nicholas Pence was shot as he rushed into the living room after hearing the shotgun blasts.

A Jefferson Parish jury deliberated about two hours on Oct. 17, 2016, in finding Allen guilty as charged of two counts of second-degree murder and 19 counts of simple burglary. The latter convictions were for breaking into cars.

Mandatory life in prison without benefit of probation, parole or suspension of sentence is the statutory punishment for second-degree murder under Louisiana law. However, because he was under age 18 at the time he killed the Pences, Allen could not receive a “mandatory” life sentence in prison, in light of the U.S. Supreme Court’s 2012 decision, Miller vs. Alabama.

As such, Judge Raymond Steib of the 24th Judicial District Court, presiding over the case, had the discretion to sentence Allen to life in prison either without or with parole. The latter sentence would allow Allen to apply for parole after serving 35 years of his sentence, provided certain criteria are met.

Judge Steib heard impact testimony during a sentencing hearing on Thursday, from witnesses that included the Pence family, the Jefferson Parish Sheriff’s Office detective who led the investigation and from Allen’s mother.

Noting the crimes Allen committed were “heinous,” an emotional Judge Steib opted to sentence Allen to life in prison without parole and two years for each of the 19 simple burglary counts.

“At no time has this court seen Mr. Allen show any emotion other than anger. There has been no remorse,” Judge Steib said.

Allen also is charged in New Orleans with attempted second-degree murder, illegal possession of stolen things, unauthorized use of a motor vehicle and armed robbery with a firearm. He is scheduled to stand trial on those charges in May in Orleans Parish Criminal District Court.

Allen’s former girlfriend, Haraquon Degruy, 20, of New Orleans, is charged with two counts of being a principal to second-degree murder and 19 counts of simple burglary. Her trial is set for May in Judge Steib’s court.

A week after he was convicted of fatally shooting a Kenner man in front of his mother’s home, Albert “Wayne” Cox was sentenced Wednesday to a mandatory life sentence in prison plus another 15 years of incarceration.

Cox, 38, a former Kenner resident, received the additional 15-year sentence for being a convicted felon in possession of a firearm, for using a .380-caliber semiautomatic pistol to kill Cornel Woods.

Woods, 42, died from a gunshot wound to his chest he received on Oct. 7, 2015, as he stood outside his mother’s home in the 900 block of 27th Street. Earlier that day, Cox confronted Woods over a woman, calling him “a bitch” and threatening to pistol whip him.

That evening, a friend of Woods’ saw Cox walking up 27th Street toward Woods’ home, according to trial testimony. Moments later, the friend heard three gunshots and saw the muzzle flashes.

Cox fled to an eastern New Orleans motel, from where he admitted to two cousins in separate telephone conversations that he killed Woods, leading the Kenner Police Department to obtain a warrant for his arrest. Cox admitted the same to another cousin.

Cox was barred from possessing firearms because of his criminal history. According to the bill of indictment, Cox’s relevant convictions were for distribution of cocaine, possession with intent to distribute marijuana and possession of cocaine, all of which occurred in Jefferson Parish. Cox was on parole for those offenses at the time he killed Woods, having been released from state prison in May 2015. He was to remain under state supervision through January 2018, according to the Kenner Police Department.

A Jefferson Parish jury deliberated about an hour on April 12 in finding Cox guilty as charged of both counts. Life in prison without benefit of probation, parole or suspension of sentence is the mandatory punishment for second-degree murder in Louisiana.

Judge John Molaison of the 24th Judicial District Court, who presided over the case, denied post-conviction motions for acquittal and a new trial. Judge Molaison ran the sentences consecutively.

A Kenner man faces a mandatory life sentence in prison for his conviction on Wednesday (April 12) of killing another man on a residential street.

Woods, 42, was shot once in the chest while he stood outside his mother’s home in the 900 block of 27th Street. Cox fired three bullets at Woods, hours after he threatened him in a dispute involving a woman.

Earlier on the day he was shot, Woods socialized with a friend in his pickup truck in their neighborhood when Cox approached them, striking up an argument and calling Woods “a bitch.” Cox then threatened to “pistol-whip” Woods later, the friend testified.

Later that evening, the friend was walking his dog on 27th Street when he noticed Cox walking up the street toward Woods’ home. The friend used his cell phone to call Woods to warn him. Moments later, the friend heard three gunshots and saw the muzzle flashes in front of Woods’ mother’s home.

Of the three bullets Cox fired, one struck a car tire, flattening it, and another one hit a truck. The third bullet struck Woods in the chest, killing him.

After the murder, Cox admitted to his cousin on the telephone that he shot woods. He confirmed the revelation to another cousin in a telephone conversation shortly afterwards. The cousins notified the Kenner Police Department, which obtained a warrant for Cox’s arrest.

Cox also spoke with a third cousin, admitting to her, too, that he shot someone and telling her he needed a place to stay. The U.S. Marshal’s Gulf Coast Regional Fugitive Task Force tracked Cox to Baton Rouge, where the officers arrested him outside the city’s bus station two days after he killed Woods.

Cox was barred from possessing firearms because of his criminal history. According to the bill of indictment, Cox’s relevant convictions were for distribution of cocaine, possession with intent to distribute marijuana and possession of cocaine, all of which occurred in Jefferson Parish.

The jury deliberated an hour in reaching its unanimous verdicts. Judge John Molaison of the 24th Judicial District Court is scheduled to sentence Cox on Wednesday (April 19). 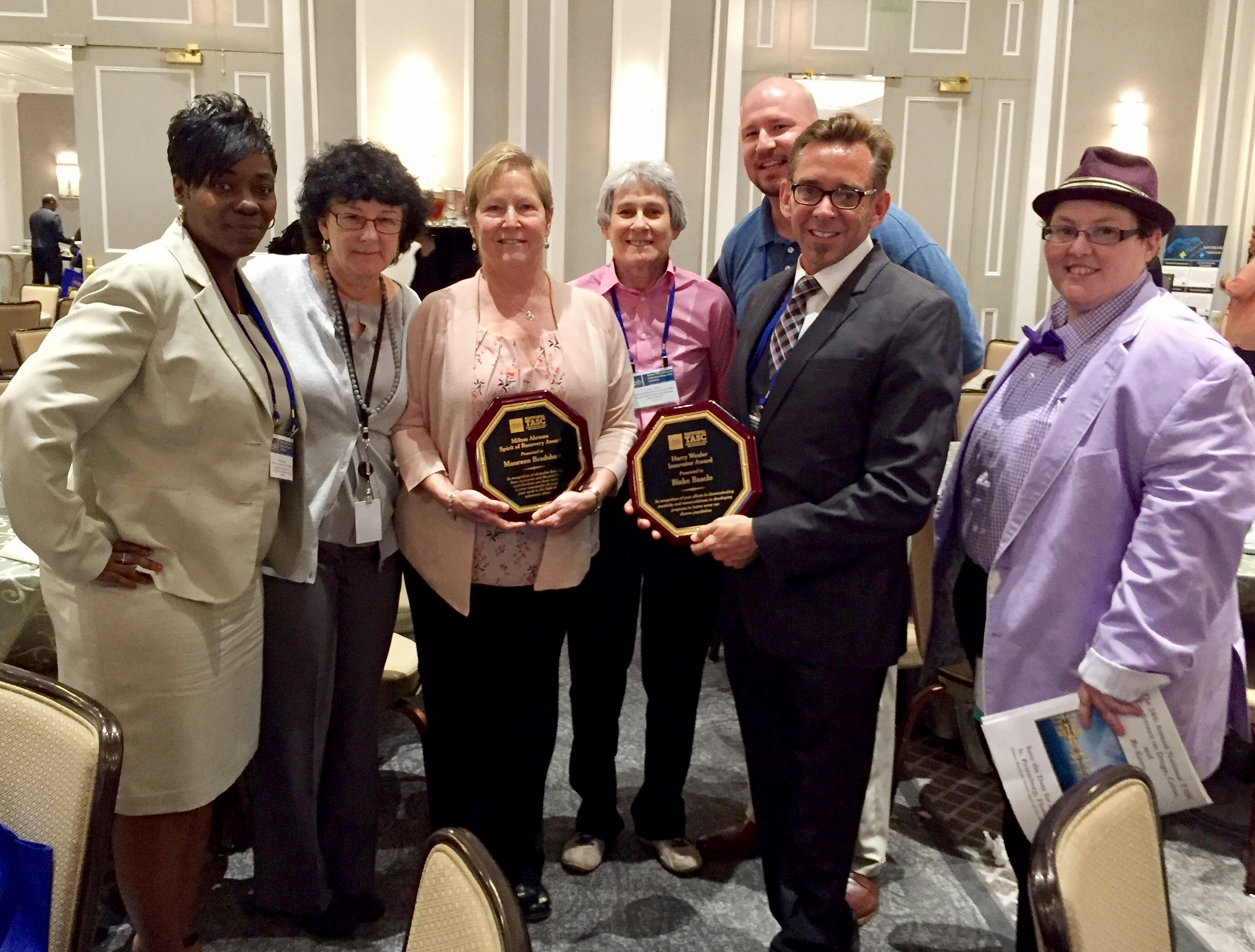 Maureen Bradshaw, a substance abuse counselor in the DA’s Pre-Trial Adult Diversion program, and Blake Bascle, deputy chief of Pre-Trial Diversion who oversees the Pre-Trial Juvenile Diversion Program, will receive the awards during a national conference to be held in New Orleans, April 10-12.

They were selected for recognition by the executive board for the Treatment Accountability for Safer Communities, or TASC, a nationwide association whose members work with 220 programs dedicated to the professional delivery of assessment and case management services to substance involved criminal justice and court populations.

Bradshaw will receive the Milton Abrams Award, formerly known as the Spirit of Recovery award. It is given to someone who has overcome an addiction to drugs or alcohol, remained sober for at least 10 years, is a productive citizen and contributes positively to his or her community through work or volunteerism.

She holds certifications in clinical supervision and co-occurring disorders and is a licensed addiction counselor who has worked for the DA’s Office since 2013. Before her recruitment to the DA’s Office, Bradshaw spent much of her career working as a clinician and director of inpatient high-intensive residential treatment.

Bascle, who has worked in the field for 27 years, received a master of social work from Tulane University in 1989 and a bachelor of psychology from the University of New Orleans. A licensed certified social worker and board-approved supervisor, he worked in the mental health industry as a psychotherapist in private practice and served a stint in Mobile, Ala., as director of several behavioral health facilities in that city.

In 2012, he joined the staff of the Jefferson Parish Juvenile Court’s Family in Need of Services, or FINS. The following year, the DA’s Office recruited Bascle to lead its Juvenile Pre-Trial Diversion Program. Bascle is receiving the award for his innovative work with the Jefferson Parish Public School and the creation and implementation of “Restorative Practices” within the school and criminal justice systems.