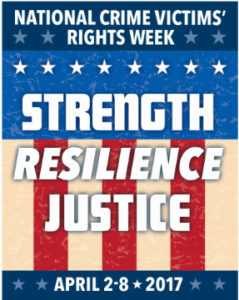 New Orleans-area law enforcement agencies and victim service providers are observing this year’s National Crime Victims’ Rights Week 2017, drawing attention to the annual event with a memorial balloon release and a tutu march through the Faubourg Marigny and French Quarter.

National Crime Victims’ Rights Week, which this year is April 2-8, is designed to draw the public’s attention to the emotional, physical and financial burdens crime victims must endure. The week also provides the opportunity to recognize the various services that are available to crime victims and their families.

This year’s theme is “Strength. Resilience. Justice.” This reflects a vision for the future in which all victims are strengthened by the response they receive, organizations are resilient in response to challenges, and communities are able to seek collective justice and healing, according to the U.S. Justice Department’s Office for Victims of Crimes, which coordinates the weeks.

“It is our honor to speak for those who have been silenced as we pursue justice, and we are privileged to have the great responsibility of fighting for justice for our victims,” said Jefferson Parish District Attorney Paul D. Connick Jr., whose office led this year’s planning committee.

“The power of partnerships is where the crime victims’ rights movement began more than three decades ago,” said Nancy Michel, who heads the Jefferson DA’s Victim-Witness Unit. “Victims who feel understood and supported are more likely to disclose their victimization and participate in the criminal justice process.”

This year, various religious denominations have agreed to highlight the victims’ rights during Sunday services. In Jefferson Parish, law enforcement and district attorney’s office employees will wear red, white and blue bracelets to mark the week.

The week’s events include:

Planning and hosting this year’s events are the district attorney’s offices and law enforcement agencies in Jefferson, Orleans and Plaquemines parishes; the coroner’s offices in Jefferson and Orleans parishes; Silence is Violence; the U.S. Attorney’s Office for the Eastern District of Louisiana; the Federal Bureau of Investigation; Covenant House, through Greater New Orleans Human Trafficking Task Force; Metropolitan Center for Women and Children; and Sexual Trauma Awareness and Response (STAR) of New Orleans.