Bell, 62, of Kenner, downloaded about 2,700 images, videos and GIFs to his mobile phone over a period of months in 2018, the Federal Bureau of Investigation and Jefferson Parish Sheriff’s Office concluded. The images included children as young as 3 years old.

The Kenner Police Department opened the investigation of Bell in October 2018, following an argument he had with his teenage girlfriend after she heard that he had nude photographs of her on his mobile phone.

She fled to her home with the phone, unlocked it and discovered the pornographic images involving juveniles. Her sister promptly brought the phone to the Kenner Police Department.

Detectives also found a notebook in his apartment in which he listed pornographic websites and search terms for search engines. Bell wrote of marrying girls as young as 12 years old.

In rebuttal, the prosecution team provided expert testimony from the Sheriff’s Office’s Digital Forensic Unit, showing that it would have been impossible for Bell’s ex-girlfriend to have the expertise to manipulate the download dates in a matter of hours to show the images were obtained over a period of months.

The jury, which was seated on Tuesday, deliberated about 45 minutes in reaching its unanimous verdict. Judge Stephen Grefer of the 24th Judicial District Court is scheduled to sentence Bell on Aug. 10.

Leach, 35, also was found guilty of obstruction of justice, for removing and discarding the pistol he used to kill Brown about 4 a.m., on May 25, 2019, inside the lounge in the 4500 block of South Interstate 10 Service Road.

Patrons at the business intervened to separate the men. At one point, Brown stepped back and away from Leach, and a woman stepped in between them to separate them further. Leach retrieved a 9mm semiautomatic pistol with his right hand, lunged forwarded and reached over the woman, firing a single projectile into Brown’s face.

Brown immediately fell to the floor beside the bar and died shortly after. He was 49.

Leach stood momentarily at the bar, then pulled at the barstool on which his female acquaintance sat. She remained seated. A moment later, he casually walked out the lounge’s front door. In the parking lot, he entered the rear seat of a car where a man and woman sat and asked for a ride. His request rebuffed, he then stepped out and walked away.

A week later, U.S. Marshals located and arrested Leach in his native Trenton, N.J., where he has family, according to evidence presented at trial.

Leach asserted he felt threatened by Brown and so shot him in self-defense, claiming that he thought Brown was going to pull a weapon from his pocket. At trial, his attorney asked jurors to find it was a justifiable homicide and to acquit him.

The video evidence contradicts Leach’s assertions, and Leach went to trial charged with second-degree murder. The jury deliberated about 2 ½ hours and returned with the lesser charge of manslaughter, which carries a maximum sentence of 40 years in prison.

Judge Stephen Enright of the 24th Judicial District Court is scheduled to sentence Leach on Dec. 16.

GRETNA, La. – Jefferson Parish District Attorney Paul D. Connick Jr., announced today that his office will not seek criminal charges against JPSO narcotics agents Justin Brister, Gary Bordelon, David Lowe or Jason Spadoni, whose apprehension of Keeven Robinson led to his tragic death. In light of the evidence, the State cannot prove beyond a reasonable doubt that the actions of any of the agents rises to the level of criminal conduct.

Mr. Robinson, who was the focus of an undercover narcotics investigation for selling heroin and cocaine in Jefferson Parish, died May 10, 2018, while resisting lawful arrest. The Jefferson Parish Coroner’s Office concluded that Mr. Robinson’s cause of death was compressional asphyxia and blunt force injuries with acute asthmatic exacerbation, and the manner of death was homicide.

“While a homicide is the killing of one person by another, not every homicide is a crime,” D.A. Connick said. “As in all cases, our review must focus upon the elements of proof as well as any legal justifications or defenses that may apply.”

Upon receipt of the report from the Jefferson Parish Sheriff’s Office on Aug. 8, 2018, this office began a comprehensive and independent review of this matter without regard to costs, resources or the time required to reach a fair and just decision. The office retained independent experts in forensic pathology and police use of force to provide opinions on the cause of Mr. Robinson’s death and the agents’ actions in arresting him.

“The role of the District Attorney in all criminal cases is to seek justice,” D.A. Connick said. “This is done by pursuing the evidence and law according to the highest standards of ethics and integrity, and by determining the facts from an independent, objective and neutral perspective.”

Throughout the process, the District Attorney’s Office remained in contact with the Robinson family and their attorneys. This morning, D.A. Connick met with Robinson family members to inform them of the office’s decision.

Today, the D.A.’s Office has published on its website, www.jpda.us, its final report, outlining the details of the review and analysis of this case. The report also outlines the findings of the independent experts who were retained by the District Attorney.

The Jefferson Parish District Attorney’s Office partially reopened its facilities on Monday, May 18. Many members of our staff have returned to their offices, but others continue to work remotely.

Anyone wishing to enter parish government facilities must have their temperature taken by parish personnel upon entering and wear a mask while inside. Click here to read Jefferson Parish government’s Phase One reopening plan. 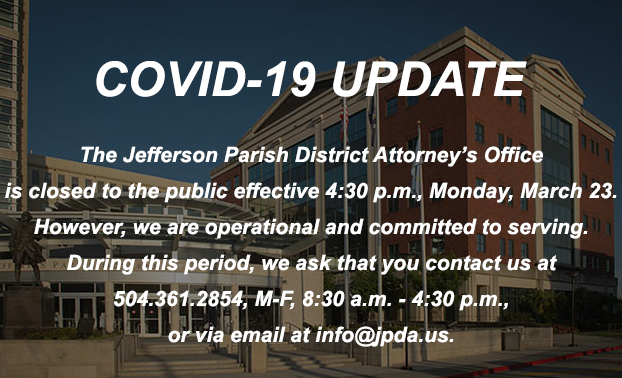 It was 1986 and Paul D. Connick Jr. was a young Jefferson Parish assistant district attorney prosecuting a complex two-defendant murder case when he first sought advice from Dr. Henry Lee.

A renowned forensic scientist who immigrated from Taiwan in 1965, Dr. Lee had already established his international reputation in criminal investigations in Connecticut, where he worked his way up as chief criminologist with the state police to becoming that agency’s commissioner.

Connick decided to attempt to lure Dr. Lee down South.

“I bought 200 pounds of crawfish and shipped them to him,” Connick joked.

At Connick’s invitation, Dr. Lee traveled to Louisiana again this week to present a course on crime scene reconstruction and forensic analysis to Jefferson Parish assistant district attorneys as part of their continuing legal education requirements. The JPDA Media Room was filled to capacity with prosecutors and employees during the presentation on Friday (June 7).

Dr. Lee’s involvement in the 1986 murder case was the start of a decades-long relationship. DA for more than 20 years now, Connick has consulted with Dr. Lee on numerous high-profile murder cases, of late including the murder and dismemberment of French Quarter dancer Jaren Lockhart.

“In this business, in this line of work, we have to get it right,” Connick told his prosecutors. “So I want people I can trust to tell me we got it right. With Henry, I know.”

The namesake for the Henry C. Lee College of Criminal Justice and Forensic Sciences at the University of New Haven, Conn., Dr. Lee has consulted on more than 8,000 criminal cases in 47 countries. In the United States, he has worked on crimes such as the O.J. Simpson case and the re-investigation of the 1963 assassination of President John F. Kennedy.

Weaving advice with anecdotal stories from his career, Dr. Lee recounted many of the high-profile cases during his presentation.

“I only do one thing: Make the impossible possible,” Dr. Lee told the audience.

A Kenner woman who stole $1,340 from unsuspecting elderly people by selling them fake raffle tickets will be sentenced to 20 years in prison.

Tammy Marie Davis, 49, pleaded guilty as charged on Thursday afternoon (Jan. 19) to 16 felony counts of exploitation of the infirmed, bank fraud, possession of cocaine, and to misdemeanor counts of theft, possession of drug paraphernalia and theft from an aged or disabled person. The crimes occurred in Kenner in 2016.

Davis struck up conversations with her victims during which she asked about their doctors, according to the Kenner Police Department. She then would lie to the victims, telling them she knew the doctor and that his child was suffering from an illness or disease.

She further asserted she was selling raffle tickets to a fundraising event, to raise money for the ill child. In several cases, the victims only had $100 bills, which they provided as payment for the tickets. Davis offered to make change, taking the $100 bills but never returning.

In one such case, Davis approached a 73-year-old woman at a credit union, asking the victim if she recognized her from a doctor’s office. Davis asserted she was selling the raffle tickets, at $10 per. The victim only had a $100 bill, which she gave to Davis. Davis stole the money.

The bank fraud charge stems from her befriending an 81-year-old man suffering from dementia and Alzheimer’s disease. She accompanied the man to his bank, where she forged his signature on a check made out to “cash.”

When Davis attempted to cash the check, a teller noticed the hand-writing differences. David fled before police arrived. The victim, meanwhile, needed medical attention because of his illness.

Police were able to identify Davis through the Louisiana Department of Probation and Parole, leading to her arrest on May 16, 2016. She was serving parole through December 2017 for a purse snatching conviction.

Questioned by Kenner police, Davis confessed to the crimes and said she needed money to feed her crack cocaine addiction. During the arrest, officers found a rock of crack cocaine in her pocket and a glass pipe used to smoke crack. Police also found numbered raffle tickets in her pockets, her car and her apartment.

Judge Henry Sullivan of the 24th Judicial District Court accepted the guilty pleas. Davis will be returned to court Feb. 16, when Judge Sullivan will sentence her to 20 years in prison.