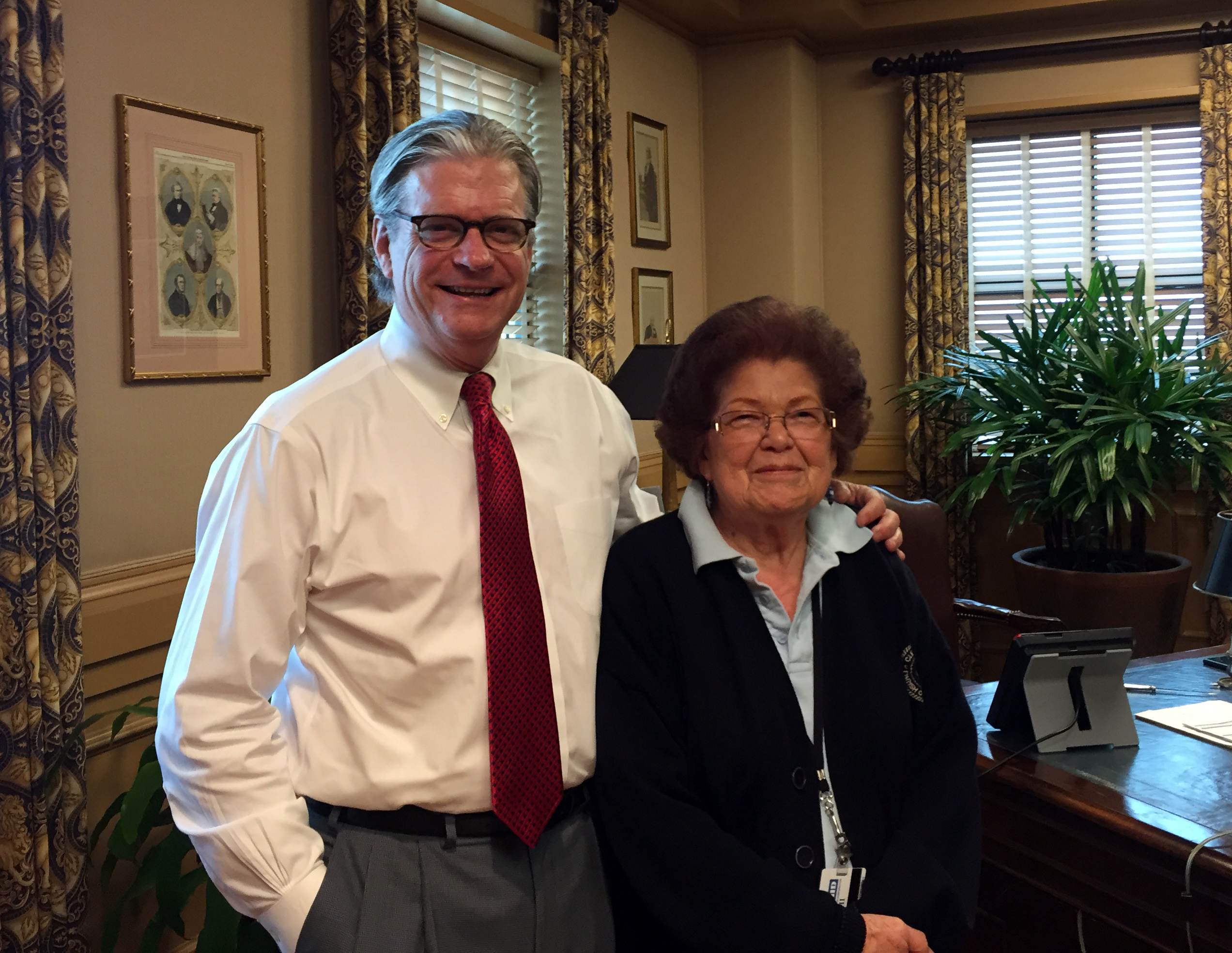 As she has done for almost every grand jury proceeding in recent memory, Rosemary “Miss Lou” Urso spent the morning on Thursday (May 12) assisting Jefferson Parish prosecutors as they presented cases to the panel at the District Attorney’s Office building in Gretna.

But on this morning, she was called away from her desk on the first floor to meet with Jefferson Parish District Attorney Paul D. Connick, Jr., who awaited her in his fifth floor office.

Miss Lou, as she’s widely called, has worked with the Jefferson Parish judicial system for 70 years, likely longer than anyone in the local government. Thirty of those years were spent at the district attorney’s office.

Connick, the parish’s top prosecutors for two decades, wanted to express his appreciation.

“Thanks for being with us,” Connick told her. “Thanks for what you do.”

“We’re fortunate to have you,” First Assistant District Attorney Steve Wimberly added. “We really are.”

For Miss Lou, the words were among the accolades she’s received during the past week in recognizing the seven decades she’s given at the parish courthouse in Gretna.

“It’s just been my whole life,” she told Connick and Wimberly of her work.

At age 86, Miss Lou says she has no plans to retire. “Not as long as the Lord lets me work,” she said after meeting with the top prosecutors. “I’ll work.”

She was a 16-year-old senior at Gretna High School when in 1946 she was offered a job as a secretary under then-District Attorney John Fleury. At the time, the 24th Judicial District, based at what today is the Gretna City Hall, encompassed Jefferson, St. Charles and St. John the Baptist parishes.

Fleury retired in 1948, and Miss Lou recalled how her new boss, District Attorney Frank Langridge, and then-Judge L. Robert Rivarde, had to drive out to “the country” to hold court in the rural parishes. The state redrew the judicial district lines in 1954, when the 24th Judicial District was confined to Jefferson Parish’s boundaries.

Miss Lou remained Langridge’s secretary from 1948 to 1972, when he left office, and remained at the District Attorney’s Office under John Mamoulides before retiring in 1976 after three decades.

Her retirement was short lived. In October 1976, she started working for Jefferson Parish Clerk of Court William “Bill” Justice. She never left. Although she works for Clerk of Court Jon Gegenheimer today, Miss Lou continues assisting prosecutors with grand jury work on most Thursdays.

She was presented with a framed proclamation from the Jefferson Parish Council, naming it Rosemary Urso Day. “It’s beautiful,” she said.

Back at her desk outside the grand jury meeting room after meeting with Connick and Wimberly, Miss Lou collated the morning’s returns and expressed wonderment over the attention she’s been receiving.

“I think that there are other people that deserve it much more than I do,” she said. “All I did was work. I’m just glad I’m working.”

Rosemary “Miss Lou” Urso began working at the Jefferson Parish District Attorney’s Office as a secretary in 1946 and continued working for the office until a short-lived retirement in 1972. That year she began working for the Jefferson Parish Clerk of Court, although she has continued assisting the district attorney’s office. Her career has spanned four district attorneys, starting with John Fleury and continuing with Frank Langridge, John Mamoulides and Paul D. Connick Jr. To mark her 70th year of employment, coworkers presented her with a cake, she met with District Attorney Connick and was presented a certificate of appreciation by Clerk of Court Jon Gegenheimer.